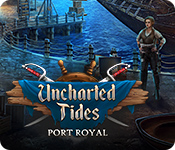 Accompany Mary Jane and Jack on a swashbuckling hidden object adventure!A swashbuckling hidden object adventure!Mary Jane’s father has been missing for decades, so when one of his oldest friends contacts her about tracking her father down, she jumped at the opportunity. Before her father’s disappearance, he was looking for a magical ship called the Cursed Rose. Mary Jane’s search leads her straight into an incredible swashbuckling pirate adventure, as she sails with her new friend, Jack, across the Uncharted Tides!