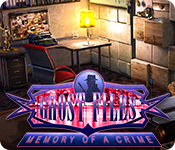 Step into the shoes of a Private investigator with short-term memory loss and uncover the shocking truth about his involvement with a serial killer called The Executioner.Reassemble a detective’s memories to catch a murderer!When Arthur Christie, famous private detective, wakes up in a strange basement next to an unknown dead man and no recollection of how he got there, he has to act fast! The police are on their way and they won't take "I don't remember" for an answer. Can Arthur pick up the pieces of his lost memory and solve the case of “The Executioner" serial killer? Find out in Ghost Files: Memory of a Crime!!