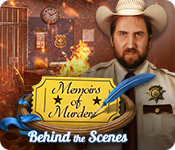 A crime film becomes reality when the leading role is murdered!Cut! Murder on the set!What starts out as a fun vacation to a true crime film set turns disastrous when Aaron’s cousin Kevin is accused of murdering the lead actress. Everybody in this small town is certain he’s the killer, but Aaron and Mary suspect someone is framing Kevin to take the fall. Can they prove Kevin’s innocence, or will he be punished for a crime he didn’t commit? Find out in this thrilling hidden-object puzzle adventure game!