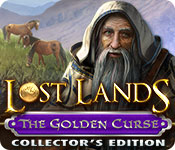 You're the last hope to stop the ancient curse!An ancient curse awakens after centuries!Life in the Lost Lands has continued peacefully for several decades since the oppression of the Black Horsemen was finally put to rest. But now, stone demon statues have begun coming to life in an abandoned old fort. The locals are panicking. No one suspects that an ancient curse has been awakened after sleeping for a thousand years. Thankfully, a mage named Maaron remembers Susan, the warrior who repeatedly saved the Lost Lands from the forces of evil. He summons her once more to the Lost Lands, because this time, it is not just the fate of Lost Lands at stake, but the entire human world… Susan's world.