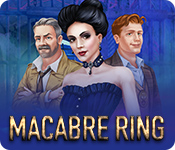 A girl has been murdered, leaving a note that blames two police officers! Follow the clues and clear their names in this match-three hidden object adventure!Investigate a mysterious murder at the abandoned prison!People are going missing in Berkshire… One girl, named Amalia, has been found dead under mysterious circumstances at an abandoned prison. She left a death note that blames the two policemen who found her, but they are innocent! The detectives start on a dangerous investigation to clear their names that leads them to a magical ring with strange symbols. Can you discover the truth about what happened in the abandoned prison? Play this match-three hidden object mystery to find out!