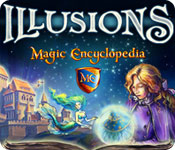 Help Catherine save the Magic Academy from a fate worse than foreclosure in Magic Encyclopedia: Illusions, a new Hidden Object game!Save the Magic Academy!When Catherine receives word of an attack on the Magic Academy, she sets out to save her school from a fate worse than foreclosure! Join her as she learns about The Illusionist, a wizard that's changed the appearance of countless objects around the world and is gathering an unstoppable army. To defeat her nemesis, Catherine will have to figure out ways to switch back and forth between reality and deception to solve puzzles in Magic Encyclopedia: Illusions!