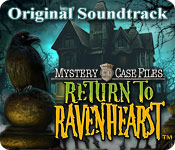 Return to Ravenhearst via your favorite MP3 player with the original soundtrack, performed by the Deutsche Film Orchestra.Relive the game with the soundtrack.Emma`s soul is free. But her ghost warns that evil still lurks in Ravenhearst Manor. Experience the twisted tale of love via your digital music player with the official Mystery Case Files: Return to Ravenhearst soundtrack. Recorded by the renowned Deutsche Film Orchestra in Berlin, the soundtrack features 16 sweeping tracks from the game in easy-to-use MP3 format. Also includes bonus screenshots from the game and a special behind-the-scenes video from the soundtrack recording session.