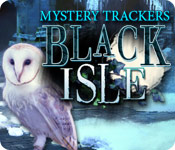 Black Isle was supposedly abandoned after an earthquake but the truth is much more sinister! Join the Mystery Trackers and learn the truth!Investigate the Black Isle!Investigate a supposedly abandoned island in Mystery Trackers: Black Isle! After a journalist is kidnapped after beginning an investigation, it&#2013266066;s up to you to learn the truth behind Black Isle. Years ago an earthquake struck leaving the island deserted. None of the buildings seem to be damaged, however, and a hooded figure seems to be stopping people from discovering the truth. Find the missing journalist and learn a sinister secret in Mystery Trackers: Black Isle!