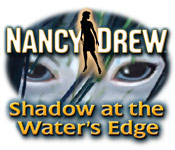 Uncover a secret that lies beneath the surface of a traditional ryokan! Stop the terrifying ghost before it has its revenge!Confront terrifying secrets!Nancy Drew heads for Japan where she’s staying at a traditional ryokan (inn) for a little RnR with Bess and George, but when reports of a vengeful ghost start scaring away the guests, Nancy’s vacation takes a turn for terror! It’ll be up to you, as Nancy Drew, to uncover the secret that lies beneath the surface, before the ghost can take its revenge in Nancy Drew: Shadow at the Water’s Edge!