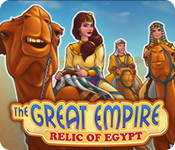 Stop a fuming pharaoh from ravaging an island paradise and send his mummified army scrambling for safety as you rebuild and defend your land!Lead a great empire and claim victory!When an ancient pharaoh goes on a rampage after being awakened from his eternal slumber, the current pharaoh puts his honeymoon on pause and sets out to capture the vile villain and restore his land to its former beauty. Fulfill your destiny and claim the victory that is yours as the leader of the great empire!