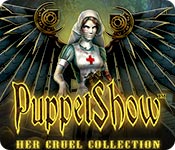 Can you save a woman's fiancé before it's too late?Who's really behind the kidnappings?You've been called in to investigate the disappearance of a young woman's fiancé. What starts as a simple investigation quickly takes a dark turn as you're thrown into a world of puppets and mystery. In a world where no one is who they seem to be, can you uncover who's behind the string of mysterious kidnappings? Find out in this gripping hidden-object puzzle adventure!