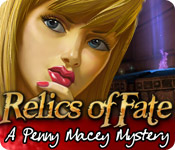 While investigating some mysterious relics, Newtown&#2013266066;s P.I., Jack Macey, goes missing! Help his daughter, Penny, rescue him!Help Penny rescue her father!Newtown&#2013266066;s local PI Jack Macey is kidnapped while investigating a series of robberies linked to a mysterious set of relics discovered in the town. You take on the role of Penny, his daughter, who discovers he&#2013266066;s missing after finding a letter addressed to her at his office. Explore the town, talk to its inhabitants and solve intriguing puzzles in Relics of Fate A Penny Macey Mystery, an exciting Hidden Object Puzzle Adventure game!