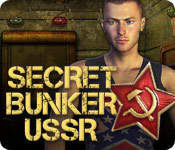 Jack's fiancée Emily was kidnapped by mysterious scientist! Can you unravel the mystery of the secret bunker and save Emily before she is used in dangerous experiments?Uncover the mystery of the Soviet bunker and save Emily!Your fiancée Emily has been kidnapped by a mysterious scientist! Unravel the mystery of the enemy's lair—Secret Bunker USSR— and rescue Emily before she is subjected to dangerous experiments! Untangle a web of mysteries kept in the abandoned military bunker, where encrypted documents, secret doors and hidden mechanisms are just a handful of the deadly traps you will face. With more than fifty stunning locations and a myriad of challenging puzzles, Secret Bunker of the USSR presents an unforgettable gaming experience!