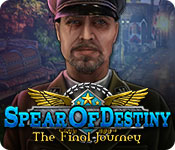 As an agent of the Alliance, you’ve been given a mission to destroy an ancient artifact known as the Spear of Destiny. In the wrong hands, it could help conquer the world.Stop a terrible power from conquering the world!During the fury of war, an amazing discovery was made. An ancient artifact known as the Spear of Destiny was discovered and it’s believed to have the power to change the course of the war. Some believe it to be only myth, but neither side wants to make the mistake of dismissing its power. Your mission is dangerous and you’ll have to cross the battlegrounds in France while facing death and destruction on every step of the way. If the enemy gets their hands on the artifact, it could be the end of the Alliance and the world as you know it.