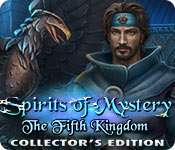 Can you stop evil forces from taking over the kingdoms?What awaits you in the Lost Kingdom?Every twenty years, the heirs to the four kingdoms are gathered for a ceremony that keeps war from spreading through the land. This year, an evil force has other plans in mind. It’s up to you as the heir to the Earth Kingdom to save your friends and the world! Can you uncover the secrets of the Lost Kingdom before it’s too late? Find out in this exhilarating hidden-object puzzle adventure!