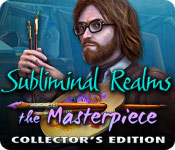 Albert's worst nightmare becomes reality when a creature from his grim paintings kidnaps his family. What does she want?Albert's nightmare comes true when his paintings become real!Albert had everything a painter could want, a successful business with a loving family to support him. But for the last few months he's been plagued by nightmares, by visions of a terrifying being that he has named Solitude. One stormy evening, he finds his nightmares have become reality when Solitude kidnaps his family, taking them deep into her painting. Albert yearns to free them, but doing so will come at a high price. All his memories have been corrupted and now only Solitude knows the truth. Albert must face his fears and journey onward, armed only with his paintbrushes and his love for this family. Can he save them, or will Solitude's painting become his final masterpiece?