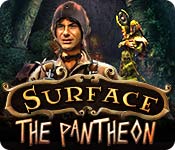 It should have been a tremendous achievement, but the tunnel through the Ridge of Leviathan became the site of a great disaster. What really happened that day?How did the Capital Express vanish?It's one year later, and a strange man – a scientist who thinks this is just like the Bermuda Triangle and other such vanishings – invites you to take part in his greatest experiment: To recreate the conditions of that fateful day in Surface: The Pantheon!