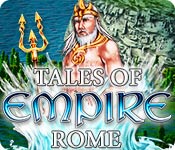 Under the protection of the gods lies a proud Roman city! Construct monuments, collect resources and use your match-3 skills to diffuse the war between Jupiter, Juno, Neptune and Mars!The Gods are at war, and you're caught in the crossfire!Caught in the middle of a fiery dispute between Jupiter, Juno, Neptune and Mars, you must use your match-3 skills to diffuse the war and uncover a proud Roman city! Collect resources, construct monumental buildings, and grow a thriving economy. Win exciting bonus games to decrease construction costs, and collect trophies along the way! Bring life to a magnificent, prosperous land and ensure its protection by the gods in Tales of Empire: Rome!