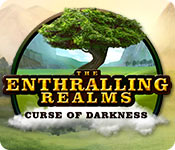 Help Ebbo and Alice collect the materials they need from each of the five nearby islands in this fantasy match-3 game!A challenging fantasy match-3 game!Halfling Village was once a peaceful place, but tragedy struck when a halfling named Ebbo found a magical artifact and unintentionally brought a terrible war on the village. Ebbo became hated and despised by his friends and neighbors. Even after the war had ended, the villagers still blame Ebbo for their suffering. Fortunately, Ebbo finds a few allies and he partners with a witch named Alice to restore the village and make it a better place.