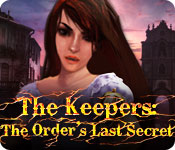 The Order’s most closely-guarded secret sleeps deep beneath the ancient Spanish streets. What lies within this mysterious box?The Order’s darkest secret will destroy our world!The Order of the Keepers has been like your second family, ever since you discovered it tied to your own past. But when you’re summoned to Spain to investigate a dead archaeologist, you’re swept into a confrontation with ancient evil forces that have been waiting five-hundred years for revenge. Explore the colorful streets of Seville, Spain, gathering clues that span across the eras of history. Who killed Pedro Alvarez? What’s inside the box he unearthed? Uncover the truth in The Keepers: The Order’s Last Secret, an exciting Hidden-Object Puzzle Adventure game.