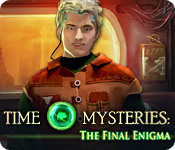 Join Esther as she attempts to influence the past in order to change the future and learn the secrets of the Ambrose family!Help Esther save the world!When Esther Ambrose receives a letter from her uncle prompting her to attend a meeting with a mysterious man, she can't possibly understand what it will lead to. Her journey will take her across time and space, as she tries to right old wrongs and influence the past to change the future. Esther will meet powerful allies, but also dangerous foes, whose only goal is to challenge her and make her fail. Help her rise to the challenge and save the world from catastrophe in Time Mysteries: The Final Enigma!